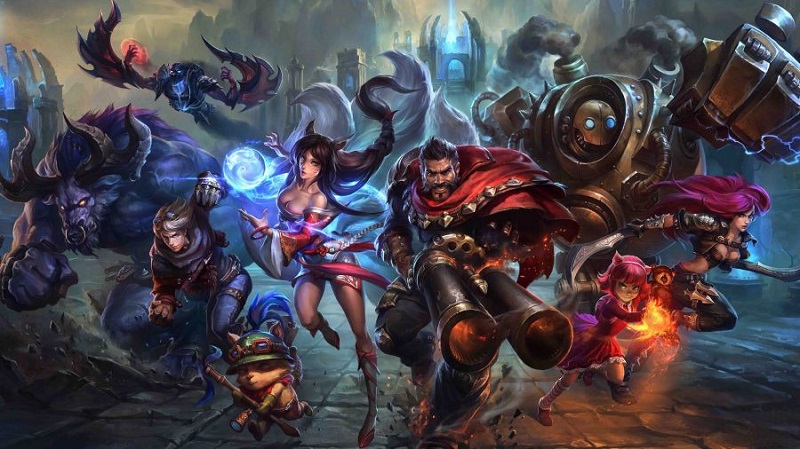 If you are already a regular reader of Ecetia there is probably little that I can explain about him, but if you have not played it yet, you are curious and want to start here you have five tips that helped me a lot at the time:

My first contact with League of Legends was back in 2012. After less than a week 3 different friends advised me to try it, I decided to give it a try. I downloaded the client, installed the files and started my first game, a tutorial. I did not like. I found it complex and I was also very used to most video games on the market, where the hero always has more life and more armor than his enemies, so it frustrated me a lot to die continuously. It is one of the best League of Legends tips.

However, when I later started playing regularly I found myself surprised that most of these problems were solved after throwing a few games.

Not throwing yourself under the enemy turret, placing yourself behind the minions or understanding that you can die extremely fast in front of your opponent online if you are not careful were some of the basic mechanics I learned. Although at first it is done uphill, what comes next makes up for it.

It is not a complicated game, but learn the basics

“Easy to learn, hard to master,” is a good way, to sum up, League of Legends. If you said before that you have to give several margin items until we understand the most essential mechanics, it is also useful to have a series of basic knowledge.

Don’t you know what item to buy for your champion? In the store, you always have a Recommended section. Over time you will learn that the choice of objects is not an exact science but, to begin with, it is fine. Don’t you know why you do so little damage? It is likely that you still have to understand the simple difference between AD ( Attack Damage ) and AP ( Ability Power ). In which line to position your champion? All are frequent doubts that you can solve with a simple Google search.

The League of Legends player community is immense and most likely there is someone who has already had the same doubt as you. If not, you can always use the official forums worldwide, the attention to the Riot Games community is probably the best I’ve ever seen in a video game.

Strategy, everything is the strategy

The beauty of chess is that on a board of 64 squares a few pieces can create infinite combinations and plays. In League of Legends something similar happens: 99% of the time it is the same map, divided into 3 streets, with 11 turrets, 3 inhibitors, and a link. What happens in each game, however, depends entirely on you. It is one of the best League of Legends tips.

LoL requires a constant analysis of the situation and planning a good strategy. Believe me, there are few sensations as rewarding as winning in a game by doing more than simply pounding a series of pointless buttons.

Play it with friends, and leave the bots soon

Although once these first games had passed, I would probably have continued to play on my own, one of the definitive steps to becoming a regular player was to start playing with friends. Install Mumble, TeamSpeak, CurseVoice or some similar program. Not only because communication is an absolutely essential aspect in League of Legends and it is much more effective to do it through voice than in the game chat but because all games, even the easiest ones, are won by playing as a team. And lose or win, it is much more fun to do it by shouting at a microphone.

My other advice is that once you have passed the initial stage of learning (it depends a lot on the player, but it happens approximately at level 6 or 7) you leave the bots and start playing games against real people. Apart from the excitement of facing more than just a machine, the style of the game and the tension of the games is multiplied by a thousand.

This has a little to do with the first point of playing a few more games apart from the first and I completely ignore if there is any kind of statistics or study about it but I am convinced that a large majority of new players leave because they only play with the First character they try.

League of Legends currently has 119 champions to choose from, something that practically guarantees that there is an ideal champion for any player. To get a better idea of ​​their style of play, they are divided into several categories: Assassin, Shooter, Fighter, Magician, Support, and Tank. You can choose those of a particular category according to your preferences although the ideal, over time, is to dominate the majority.

However, it is advisable to start with some such as Ashe, Master Yi, Warwick, Miss Fortune or Fiora. Within the game, there is a special menu for each champion that specifies which class he belongs to and videos demonstrating his abilities.

Bonus point: League of Legends is much more than a game

The real triumph of Riot Games with League of Legends is to have created a game that is as fun to play as watching. Thanks to this, they have completely revitalized the concept of eSport and have achieved that the competitive finals of their tournaments reach several million dollars and are more seen than the finals of many other “traditional” sports. It is one of the best League of Legends tips.

But for me, the funniest thing about LoL is that it is absolutely flexible. He has a metagame so extensive and complex that becoming an expert of the game takes years and many hours of practice. On the other hand, the average duration of a game is around 30-40 minutes so it is usually my first option if I do not have much time to play or if I feel like relaxing at the end of a long day.