“Wolfenstein II: The New Colossus” undoubtedly one of the best FPS of the year 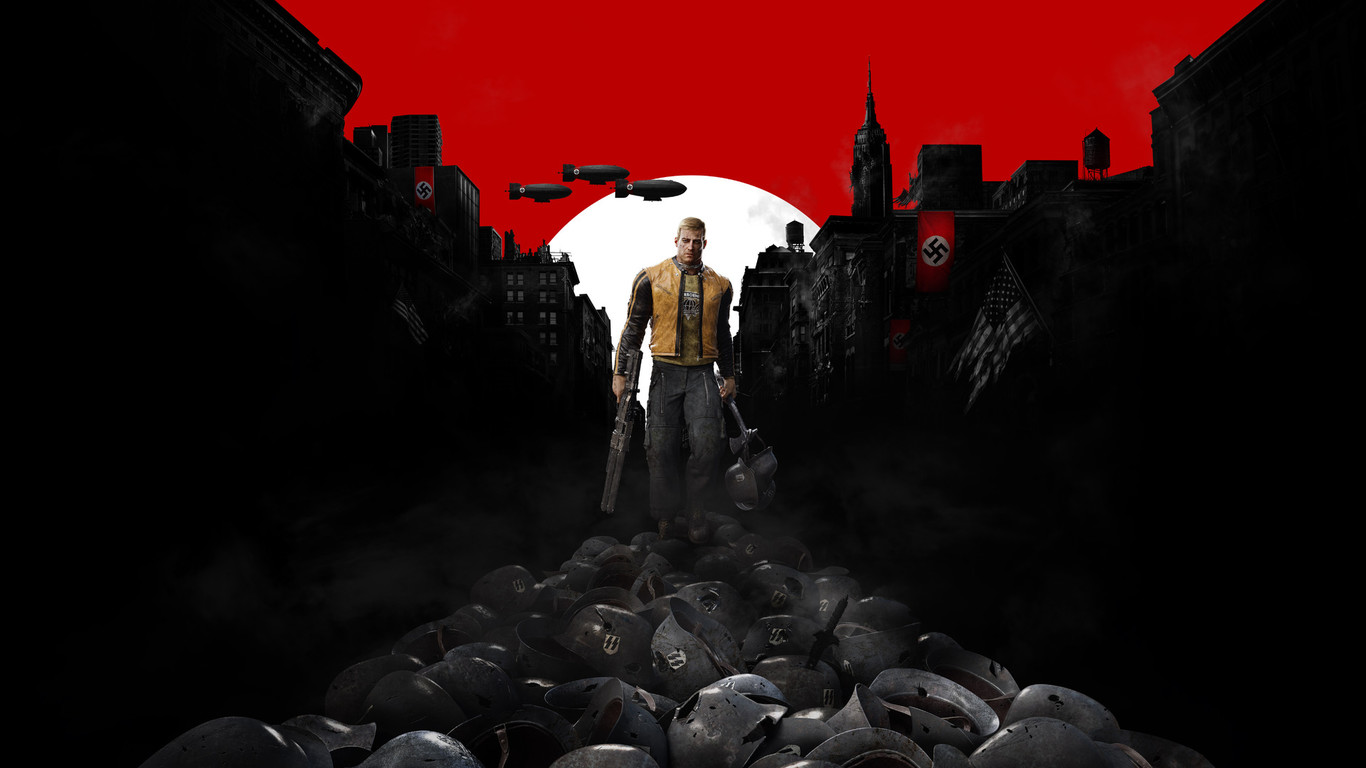 30 Oct “Wolfenstein II: The New Colossus” undoubtedly one of the best FPS of the year

What a close month awaits us. From tomorrow those who seek adventures in Ancient Egypt will have at their disposal ‘Assassin’s Creed: Origins’, while those who seek a magical trip with Mario may opt for ‘Super Mario Odyssey’, but lovers of games of action can be done with ‘Wolfenstein II: The New Colossus’.

The truth is that Bethesda has put the batteries to become one of the most prominent companies this fall. We already enjoyed recently ‘Dishonored: The Death of the Stranger’ or ‘The Evil Within 2’ and now returns to the fray with this new installment of this mythical saga of FPS that returns through the front door after the events that took place in ‘Wolfenstein: The New Order’.

Being a continuation, the first thing to ask is: do you need to play your predecessor to understand the argument? And we can say that part is not mandatory, especially since nothing else start the game and will update us about everything that has happened with a fairly complete kinematics that reviews the most important moments of the previous title, explaining what has happened and introducing us to the most important characters.

Still, it does not hurt to give a good chance to ‘Wolfenstein: The New Order’ because it is a great game, but if you want to launch the adventure directly with this sequel is likely that the kinematics are not clear all the details. On the other hand, if you are one of those who simply want to limit yourself to distributing shots without caring about anything else, you will be slow to take your weapons and get down to work.

Something that is somewhat curious is that in the previous delivery at a particular time had to make a decision that involved the survival and sacrifice of two characters. The players had to choose who wanted to survive, a choice that repeats itself at the start of a memory, although this does not affect the course of the story because it will remain the same in both cases. However, some cinematics will be completely different according to the personality of each character.

Said which, as we said previously, the events take place at the same point where the previous ‘Wolfenstein’ ended, so we will control a BJ Blazkowicz somewhat battered and on the verge of death, whose only way to stay I live temporarily and especially to be able to move is through a special suit that will give you certain skills about which we will talk about later.

So, Blazkowicz and his team will continue their cause to completely eradicate the entire threat of the Nazi army that has taken over the entire United States and is slowly ending with the population imparting its sadistic dictatorial regime. For this we must locate more allies who want to join this rebellion and that’s when we will meet old familiar faces and new ones, the same will happen on the side of the Nazis.

The pros and cons of the scenarios

All the action of ‘Wolfenstein II: The New Colossus’ will be divided into different levels in which we will cover on a few occasions the base of the protagonists that is full of Nazi soldiers, while in the United States we will visit places like New York, New Orleans or New Mexico, some in better condition than others after the attack they have received that has virtually caused the annihilation of the entire population and has left buildings in ruins.

This version of the United States, although it is worthwhile to imagine such a situation in reality, is simply impressive to travel. The team in charge of all the art and stage section has done an exemplary job recreating these cities with a desolate aspect and with many details, especially in those in worse condition, in which we will visit the interiors of the houses , buildings, premises, meters, etc.

In the designs of the levels is where we find one of the biggest differences between them. Leaving aside the base of the protagonists where we can have a moment of relaxation, on the screens where we will go to combat there will be times that we will visit places that will be totally corridors and will not leave too much option to exploration and then there will be other more spacious.

This is especially a problem when it comes to shooting, because in the most closed scenarios it is easier for us to end up getting caught somewhere and surround us to finish with us in a heartbeat. On the other hand, in those that are more open, we will have more possibilities of staying safe and waiting for the right moment to shoot without losing your life in the attempt. Of course, in either case the action is incredibly frantic and there will be almost no time when we will be without something to do.

You may also like to read: “Bulletstorm: Full Clip Edition” introduces us all its improvements with its action-packed launch trailer

This is how Blazkowicz prepares for combat

One of the aspects that has generated me the most doubts has been BJ Blazkowicz himself and not because he is a bad character, at all. I understand that after what he suffered in the previous game his body is too weak, but so much so that it is paper? It is not an exaggeration, the endurance that has is very limited and there will be times when we end up dying again and again until we find the best way to face situations.

Sometimes the best option will be gunning down any enemy that we see, other times we will have to stay indoors and do it little by little and there will be times when we must escape at all pill and ignore those who try to eliminate us. There it will depend on each one, but it must be said that the points of self-preservation and in which we will reappear after dying are not too well distributed in general.

In part, I am glad that we have to constantly look for kits to restore a small part of Blazkowicz’s health or pieces of armor that will protect us from bullet impacts, because that makes it more challenging and we do not have to limit ourselves to shoot and cover us all the time. However, the points of life of both parties will be reduced at such an exaggerated speed that sometimes we will not even notice it and that for a title with such a brutal action is what causes me a bit of controversy.

On the other hand, the armor with which it will have some gadgets that will give our protagonist some additional skills. For example, with the Battle Walker we will make stilts appear under our feet to reach higher areas or shoot from a higher point, and we will also have a devastating tackle with which it is better that nobody crosses our path if you want get out well or that will be useful to throw down some suspicious walls.

In addition, depending on the way in which we finish with the enemies we will obtain points of improvement. If we finish with Nazis without being detected or without activating the alarms, we will obtain the advantages of stealth to move faster while being crouched or so that the silenced weapons do more damage. The advantages of destruction will give more damage to the weapons depending on what we use and finally there will be the tactical advantages that will reduce the damage caused by the bullets if we finish with enemies shooting at the head or with traps placed on the stage.

Shots over here, shots over there 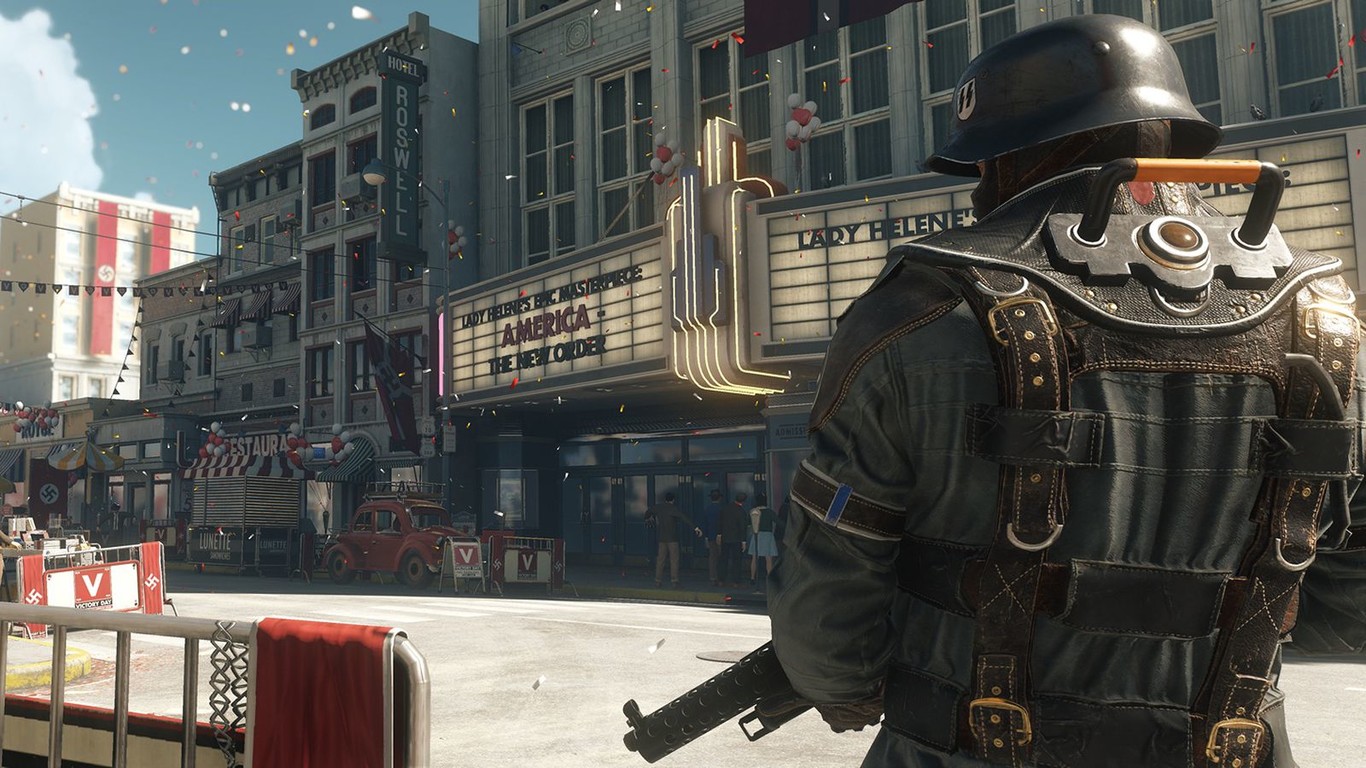 We must say that our protagonist will not walk with little girls at any time and to end the Nazis hand to hand can use an ax that will not have any kind of contemplation when cutting arms, heads, legs or any part of the body that seems to him, witnessing real massacres. Of course it is noted that the game is recommended for over 18 years because the violence it presents is constantly exaggerated and striking in equal parts.

We will witness the same thing when distributing shots right and left, with bloody bodies in which liters of blood will drip. And here I can not avoid commenting on some very comical moments that I have witnessed when, when attacking with explosive weapons, the bodies of the enemies have ended up embedded in the walls or on the ceilings of the power that had the impact.

The arsenal we will count with will be large, with pistols, submachine guns or heavy weapons. All of them we can improve with improvement kits that will be somewhat hidden. What is certain is that at no time we will have to worry about the ammunition, because there is to bore, so we can dedicate ourselves to shoot without fear because it will be almost impossible for us to run out of bullets, highlighting the fact that in this second part we can use two weapons at the same time.

In addition, when the game is divided into six different difficulty levels, each one more complicated than the previous one, the Nazis will be harder and more aggressive. Already in itself at the lower levels will have to mow down nonstop to eliminate them, so imagine how it should be at the most expert level. On the other hand, in addition to ammunition and improvements, in the scenarios we will also come across stickers, illustrations, documents and a multitude of collectibles for those who like to explore each corner to get 100%.