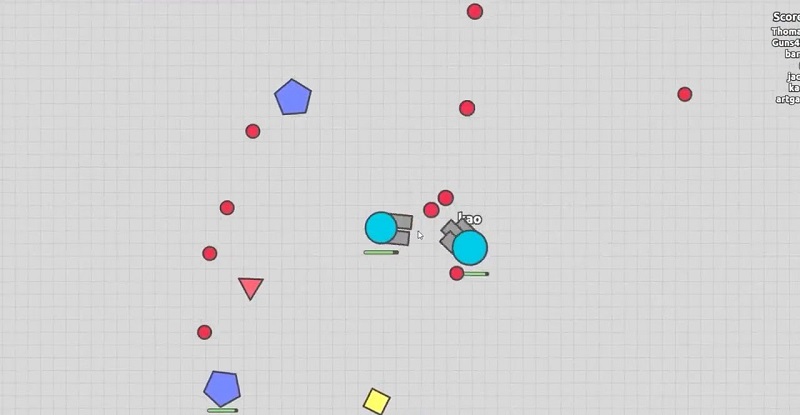 Country of the Games back to bring us another of its fun and entertaining betting, a new multiplayer action title where we enforce in a frenetic geometric war.

In Diep.io the player is introduced into a basic blue tank and quickly target is very clear: destroy the different geometric shapes to start rating, level up and access to health improvements, ammunition and weapons. But beware, remember you are not alone on the battlefield and often on there is a greater than you and better armed tank.

At the start, jump into by the larger tanks is suicide, so at first we turn to shoot at different figures to rise rapidly level, that and keep its distance without losing eye to the edges of the screen where we can see, before they appear, the shells of the enemy. Noting the trigger type, the rate of fire basically, we can deduce the type of enemy we have around, a foolproof trick that will help us to stay alive at first because in the battlefield there are some tanks / players with a level of health and capacity devastating fire.

Leveling up is not a quick process and each figure gives us a different score, shoot the pentagon’s is the most flexible way to accelerate our evolution but is a tactic double-edged because often the most powerful enemies are around doing the same as you. As we go to survive and evolve we can improve the characteristics of our tank: Health regeneration, shutter speed, penetrating power, recharge and movement speed. During the game you will see real “monsters” armed with huge turrets, in some cases equipped with several guns that allow shooting in several directions.

You may also like to read another article on GameGreatWall: Papa’s Bakeria

The design is simple but fun game, reminiscent of the war stories that were drawing in your notebook sheets during that boring college class. The grid background and soft colors of the drawings enhance the memory. Diep.io is one of the multiplayer action games selected by Country of the Games.