These are the best games like rust for Android 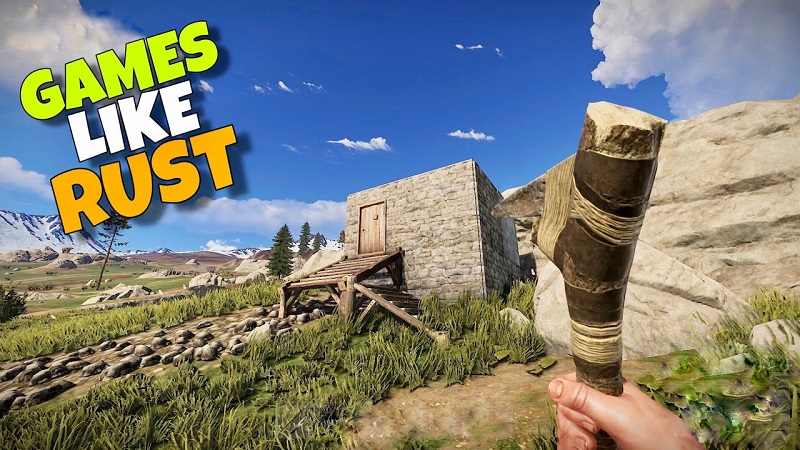 21 Jan These are the best games like rust for Android

Posted at 05:27h in Adventure by Bishop Arthur 0 Comments
0 Likes

Survival has a very noticeable effect on many of the games that are released for Android. Rust is the benchmark in this genre, being a pioneer in combining construction, survival simulation, and the action of a good shooter. We cannot enjoy it on Android directly, but we do have games that are very similar to Rust.

The creators of Garry’s Mod decided to launch this title in which we began as God brought us into the world, and from there, take advantage of the environment to build houses, make clothes and create weapons, as well as the mere fact of eating and drinking. It is a benchmark because, despite its official launch in 2018, it had early access that began in 2013.

What is the survival sandbox genre?

In general, a sandbox is a style of video game characterized by giving the player a high degree of freedom to be creative when completing tasks towards an objective within the game or simply to play without restrictions. Some pure sandbox games simply have no goals and are simply worlds that give you the ability to do what you want.

Sandbox games are often associated with open-world concepts that give the player freedom of movement and progression in the game world. Specifically, in the objective of survival, which is where the Rust game moves, it aims to develop life on an extensive island with all kinds of climates and reliefs, get materials and resources to eat, drink and have a place where sleep. From there, the title contemplates aspects of a shooter since weapons can be made to face other enemies as if it were a Call of Duty.

Rust is it on Android?

As soon as we see the fame that Rust adopts on desktop consoles, the question we instantly ask ourselves is whether we can find it on mobile devices. It would not be the first time far from it, since we have a considerable number of game console titles that enjoy a port for Android. But unfortunately, Rust is not available for our Android devices, as Facepunch hasn’t even gotten around with its development.

We did not find any official statement by the developer or any indication on this issue, but the keys to its absence in Android are obvious. It is a really complicated game to develop with the same characteristics for mobile phones. It is not impossible, but due to the extension of the map, the constructions, the voice chat with the other players, the functioning of the servers, and the graphical capacity, it is tremendously difficult to do it almost the same on Android. For now, we will have to settle for other similar options.

Why has Rust suddenly become so famous?

It already had its popularity among gamers around the world when early access was launched back in 2013. It has always been because of its survival format in a sandbox context, something that was not very popular a few years ago. However, after its brilliant start, its playability has gradually decreased with the release of other titles on the market.

However, it has once again enjoyed a rising peak thanks to the prominence given to them by the most famous streamers and influencers in the Spanish-speaking community, both in Spain and Latin America. The idea arose with the intention of creating a large-scale event where the best-known internet icons could be brought together and broadcast on Twitch. The founders of England, which is the name of the server where they play, are Rubius and Alexby11, who decided to buy a server in which only celebrities such as TheGrefg, Auronplay, Lolito Fernández, Ibai Llanos, among many others would participate.

Once all this introductory and informative part about the game and the genre to which it belongs has been exposed, we are going to proceed with all the titles for Android that use a similar mechanic, or at least, have the same objective, which is none other than survival. It is not an easy task, since there are not many options verified by the community and that have the same characteristics as Rust.

If you are looking for a real alternative to Rust, you should choose this title. Obviously, the rest of the options have very common aspects, but without a doubt, it is the one that is most reminiscent of the work created by Facepunch. The aim of the game is to answer the call of your duty, survive the last day in the wild using collected or stolen materials. Players must successfully control their hunger, thirst, and health to survive in this afterlife world, otherwise, you will be dead by daylight.

Despite the imminent threat of dangerous wildlife, the main threat is other players due to the game being multiplayer only. Combat is accomplished through firearms and handcrafted weapons. The game features the creation of items, weapons, etc. And to stay protected at night, we have to build our own house.

A set of characteristics very similar to the one referred to above, although with a worsening in all sections. Graphically it is of lower quality, with a worse definition of the elements and with an important absence: there is no multiplayer to face other people. The enemies with whom we must be careful are all the wild animals of the island.

There is an environmental cataclysm that spreads a toxic component throughout the world. After a failed exploration, I am a disaster investigation volunteer who has run out of equipment, food, and water on a desert island. You must survive by all means and return home. It won’t be easy so you have to build, equip yourself with clothes and weapons. As well as build a house to survive.

We still don’t have it online, but with a somewhat different context. We are a pirate who has been shipwrecked on a desert island. And without the means to navigate again, we have to make life in the territory. We have to hunt, fish, build to protect ourselves from threats, and fight with the living creatures. Its strong point is the very spectacular graphic section and with enough realism.

Despite not being Rust, the survival of this game on the island is not as easy as it seems. Search for food, build monster shelter, grow plants, create weapons, tame animals and survive. This survival simulator includes an advanced crafting system. With a large number of starting resources, wild animals, and weapons to craft. In addition, online multiplayer and an integrated chat are planned.

The game is dedicated to survival on an island inhabited by the different animals that live on the land. The context of the game is about a character who has fallen on the island as a result of a plane crash. In which he must find food and shelter. As well as defend himself from the fearsome native cannibals.

It is a survival game that has a very special and nostalgic feature. And it is that it remembers Minecraft from the first moment, although with different mechanics. Again we have to craft materials, assemble weapons and build a house to take refuge. But all with the characteristic pixelated graphics and a battle royale to face other players.

Survival and Craft: Crafting In The Ocean

On this occasion, survival will not be on an island or in an apocalyptic world, not even in a village, since the whole story takes place on a raft in the middle of the ocean. This raft can be improved and expanded, obviously. But we must be aware of the different threats from the water, such as sharks. In addition, we can make trips to other points on the map.

Other games are similar to Rust, a survival adventure where you create your own destiny in an open world environment. Everything you find will serve to survive. Hunt wild animals, fish or collect fruits to overcome hunger. We can even explore the island by car. We have a mine of resources and tools of art, weapons, buildings, clothing, and more items to survive. Finally, you have at your disposal hidden treasures, which can be accessed by diving and swimming.

We are going to put a game similar to Rust, but with a different theme. The epicenter of the story will once again be an island. But with much more futuristic elements and a setting from another era. More modern cars, minimalist but state-of-the-art buildings, not to mention the clothes and weapons. It does not have online, but we can have more characters on the island. In addition to having a creative mode to unleash construction.