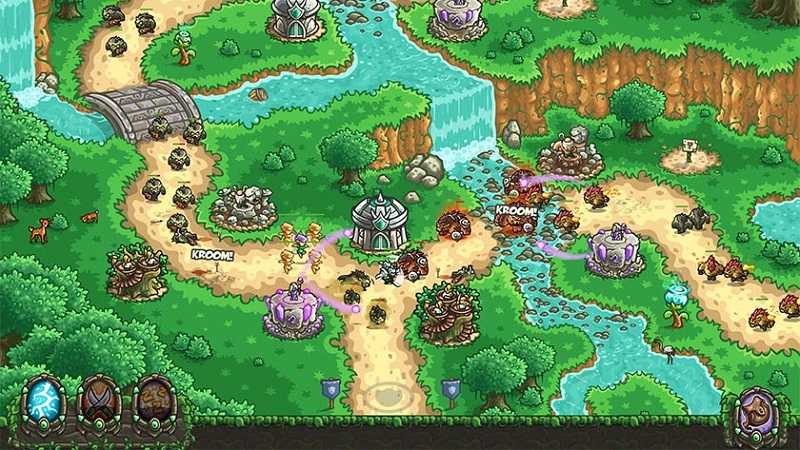 Posted at 15:11h in Adventure by Bishop Arthur 0 Comments
0 Likes

The tower defense or tower defense games on Android we have given much play, and keep on giving, from long ago. Perhaps it was one of the first categories with which the power to play from a smartphone began to emerge.

Titles like Kingdom Rush from 2011 convinced us that this new platform could accommodate very entertaining moments with tower defense games. So we go with a list that collects the best and those new who are giving something to talk about. Go for it.

There is no better way to start this list with one of the best tower defense games that we have on Android. A whole game in which attention has been paid to cartoon-like visual design, perfectly hand-designed levels, and a series of heroes that accommodate different strategies.

A game that started a whole saga to have Kingdom Rush Frontiers or the last Kingdom Rush Vengeance. Thanks to these games, Ironhide Game Studios has become known as one of the studios that can be trusted for tower defense. It is premium, but one of the essentials on the list.

If we are looking for something newer we have Infinitode 2 with its hundreds of levels and improvements to immerse ourselves in a minimalist visual style. It must be taken into account that this minimalist style allows us not to exert high pressure on the consumption of mobile resources, which means that it can shoot with dozens of enemies on the screen.

Something that other tower defense cannot say that when the thing is bundled, our CPU begins to suffer so that the games slow down. Here we have that important point for one of the best tower defense that we have seen in recent years. Oh yes, and this one is free, so don’t delay in installing it.

We are going to tower defense but from a 2D side perspective. And on top of all that Metal Slug saga that makes the effort here to take us to a great gaming experience. We have to be generating combatants all the time to take them into combat and thus try to defeat the enemy.

Perhaps it is not that tower defense more in the style of placing turrets in strategic points on the map, but we have to defend our base by generating fighters to defend ours. Free, of course.

We return to the experience of placing towers with this game that has been able to get along very well with the Android community thanks to its updates. Good graphics level for a game that was released a few years ago and that is still in great shape.

It stands out above all for its graphic level and that it has been able to hook many players for this reason. Another of those colorful tower defense that tends to have a very good acceptance as shown by the average score in the Play Store.

One of the most recognizable tower defense sagas that have treasured tens of thousands of players. This sixth installment has a great average score in the Play Store as it is a freemium game with very good finishes and that generates a pleasant gaming experience.

If you want to know what this saga is about, install this sixth installment, and if you want more, you have five other games waiting for you with a lot of content and full fun with those Bloons that are waiting for you from now on.

Another important saga of the genre and that plays with a more realistic aspect if we compare it to previous games where bright color plays a great role. Here we are going to a more current and modern confrontation to take us to combat units such as tanks and more.

A game that graphically performs very well, but be careful when we have many units on the screen, because some of this saga slowed down but well, even on high-end phones. One of its highlights is that its waves become almost infinite, so be patient because you will need it to progress and unlock new turrets with which to do more damage if possible. Freemium, of course.

A tower defense that takes us to classic mythology to dress up and create a pleasant experience. Perhaps it is one of the ones with the lowest quality on the list, but it does not mean that certain of its elements hook you. We are going into eternal combat between the forces of light and darkness.

A medieval touch for orcs, goblins, and necromancers among some of the characters that you will meet in this free game. The first Myth Defense was premium, so if you want to test if they know how to make good games, we recommend that you try this one to go for the paid ones.

We cannot leave aside one of the legendary towers defense that we have on our mobile and that first came to PC. It does not follow the approach of the rest of this list, but it is a full-blown tower defense. You have to place these plants in the path of the zombies so that they do not reach your garden and make a mess.

A game that has been played by millions of players of all classes and ages and that, although its time has passed, it is still the best of the saga. Yes, we have a second and third installment, but like the first none. In this case, it is true that the second parts were not good … A huge game as tower defense. Essential.