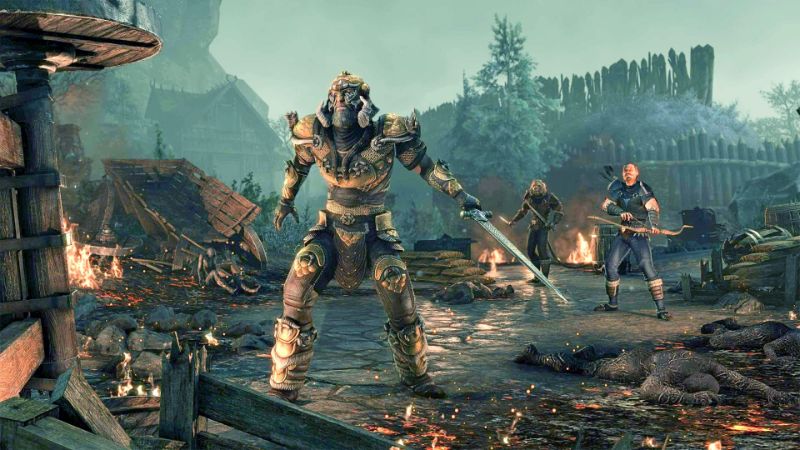 Posted at 12:52h in Action by Bishop Arthur 0 Comments
0 Likes

Skyrim was released a long time ago, but it’s still very playable thanks to mods and an active fan community.

However, if you want to have a break from this game, but want to play something similar instead, there are quite a few games that might interest you.

If you initially became familiar with The Elder Scrolls Series through Skyrim, you may want to check out the older titles in the series, for example, Oblivion.

While the graphics may seem a bit dated, the gameplay and content is still valid and can be very enjoyable. Actually, some people prefer Oblivion and Morrowind (which is even older) to Skyrim, because the world seems to be more developed, and you often have a wider choice of things to do in the game.

The story of the game begins with the death of the Emperor, and you have to find the illegitimate heir to the throne, helping to close the Oblivion gates that open all over Tamriel (well, Cyrodiil above all, since it is the place where the game history).

The Oblivion has the Shivering Isles DLC, which is one of the best official add-ons in the game.

Another obvious option if you want to get the closest playability possible. The Elder Scrolls Online was released a few years ago, but it is still popular, and new expansions are being added from time to time, such as the recent ones called Morrowind and Summerset.

Despite being an MMO, Elder Scrolls Online is a mix of Skyrim greatness and online gaming experience.

The game does not have a subscription fee, but you will need a PS + or Xbox Live account.

It is one of the premier RPG titles from the creators of the Mass Effect Series. This is a fantasy RPG with rich lore and good loot.

If it offers a third-person game, with partial turn-based combat that has a MOBA element.

This is a massive fantasy RPG with great design and exceptional combat.

The game has a great story, and offers a lot of content – you will have a lot to see and do. And even if you discover everything in the game, you will still have two more expansions to play, which will extend your gaming joy for over 40 hours.

You can also try the previous two Witcher games, if you haven’t already; the whole trilogy is really good.

The aim of the game is to show 15th-century life in Eastern Europe in the most realistic way.

The main hero is Henry, the son of a blacksmith, who can learn various skills such as drinking, picking locks, throwing punches, and even reading and washing.

The game has a similar atmosphere to Oblivion, with a good story and a good soundtrack. There are many interesting side missions and many things to do in general in the game.

The game is difficult but with great rewards; it has challenging bosses and almost endless lore. You can travel through it and discover a lot of things due to its rich lore.

It is an open-world game with quite fun gameplay that includes stealth action, the killer character, and free-run. If you want to become a pirate, try the fourth part of the game series, called The Black Flag – you will be able to sail through the Caribbean and attack and loot ships.

If you prefer city exploration, then go for Assassin’s Creed II, where cities are bigger and more impressive.

Lord of the Rings: Shadow of Mordor

The game combines Assassin’s Creed-style free run and Arkham-style combat, with enemies changing their command structure based on your actions.

To defeat the toughest enemies you will have to discover their strengths and weaknesses.

The potential problem is that despite the open world, the game content isn’t that varied – it’s just story missions and side missions and killing orcs for fun.

The game was released in 2013. It offers a huge open world, where you can choose any adventure you want.

There are many factions to join that unlock the unique combat systems and you can get helpful companions to make mission completion easier.

It is a JRPG game, where the main character is the reincarnation of a legendary hero from a forgotten time. But once the truth is discovered, the main hero is hunted down by a relentless army.

Those who believe in your story will help you on your quest that stretches across continents and vast oceans.

The game offers a lot of lore and a unique backstory.

If you want to have a good RPG experience, but don’t mind switching genders, you can try the Fallout series.

Both Fallout 3 and Fallout 4 are excellent role-playing games: they offer engaging stories to the player, and the karma system gives the opportunity to choose between being a good guy or a bad guy.

There’s also Fallout: New Vegas, which is even more interesting than Fallout 3.

And if you don’t care about really old but amazing games, try the original Fallout 1 and 2, which while completely different from the newer titles, can offer even more in terms of gameplay and story.

This is another open-world game, although not as much as Shadow of Mordor, and it offers you the freedom to roam the game however you want. And although it’s not like Skyrim, where there is a lot going on, the game has good gameplay and graphics.

I require an expert in this area to resolve my problem. where to buy cialis in malaysia After I originally left a comment I appear to have clicked on the -Notify me when new comments are added- checkbox and now every time a comment is added I get four emails with the exact same comment.