Forza Motorsport 7, the visual and playable zenith of driving on consoles 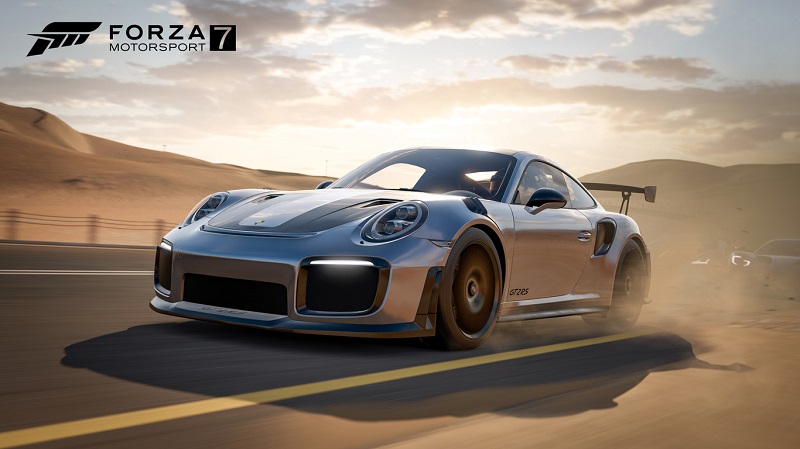 06 Oct Forza Motorsport 7, the visual and playable zenith of driving on consoles

‘Forza Motorsport 7’ is an exceptional car game. Here are the points about what that means, the difference between the Microsoft game and what you can see in the market in terms of pure simulators, and how this is more a mix between arcade and simulation for all audiences than a niche game. But you put the points that you put to your eyes, it is impossible to see how much it becomes a real joy.

Being more in favor of the drifts of Forza Horizon 3 than the adjustments and adjustments to a car available in ‘Forza 7’, this means that the last game of Turn 10 Studios ends up being for me just as enjoyable despite avoiding its layer of deeper personalization. Also that the last jewel of Xbox One is a game in which all, without exception, have room.

A game for all audiences

There are the smallest of the house and their inexplicable passion for everything that has wheels, that can play with all the assistance activated to reach a point near the autopilot. There are those who feel orgasmic feelings with the graphics, that will need the cigar after after finishing any race. Also the simulation fans and cars, which have plenty of options available to approach that term and can admire in every detail more than 700 vehicles.

Then there are the players like me, that the only thing they ask ‘Forza 7’ is to be a huge car game in which to collect cars and overcome races and tests. After several days with it, and with options still to be unlocked like the vehicle auction or the Forzathon, temporary challenges with exclusive rewards, the new Xbox One offers me everything I could ask a game of cars today.

It follows the wake that has been marking since its first version, chasing that more and better hodgepodge in which to add cars to the catalog and recover circuits of the past, but it is also the edition that more changes includes at the level of development, probably not with joys to everybody.

The most significant is his campaign, a sort of championship in which to get points based on completing events and challenges. Some are awarded a new car. All of them report credits with which to buy new vehicles or, what in some heads will be a hecatomb and in mine only turns out to be an awkward turn, boxes with loot. 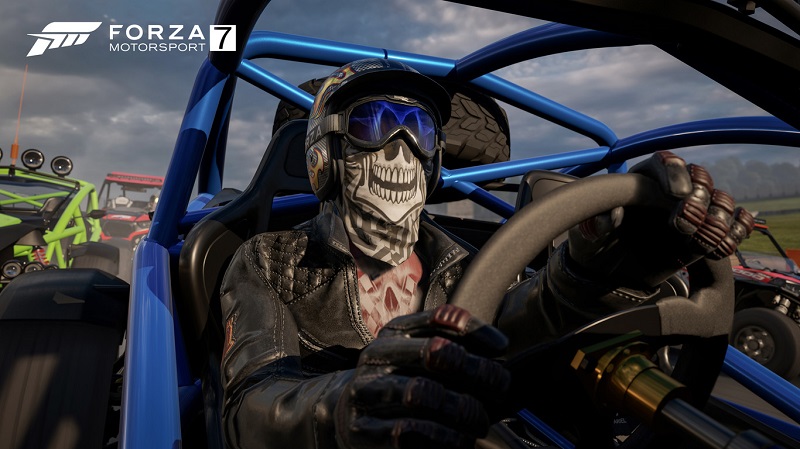 The growing problem of loot boxes

The idea is that you can invest the money earned in the tests (for now without possibility to buy with real money) in boxes with prizes that will include aesthetic changes for the pilot, modifiers and vehicles. The first are suits and helmets, from promotional brands to clown or mime, something I have not spent too much time on a matter of taste (black beats everything), but that can have its grace if you want to strut on the podium when you play online.

The modifiers are charts of one or more uses that you can add to the tests to increase the experience gain or credits. It’s something we’ve already seen in ‘Forza 6’, and there are those who have more money because yes, but also those that force you to play in specific atmospheric conditions or meet challenges such as making perfect curves or overtaking before crossing the finish line.

Finally the vehicles, which means getting new vehicles and, with some luck, save you much of the pasta they cost. The problem comes when many of those cars are tied to your experience and the luck you have with the boxes, which means taking to the game a certain component of farmeo that will inevitably displease more than one.

If for me it is not a problem is because it does not enter my plans to get all the vehicles available in ‘Forza 7’. After overcoming his campaign, my dribbling with the game will be punctual, approaching the challenges of Forzathon or playing some race with my favorite car to relax and disconnect for a while. I understand to what extent this may be a problem for some players, but the ones I have with this delivery are others.

You may also like to read: Forza Horizon 3 wants to be the best racing title of the year and has reason to be

Not everything is joy in Forza 7

The first of them is how little some decisions are held. In order to become the best driver in history, you should hand your rivals face to face in each race, not just accumulate points until, surprisingly, you get enough to skip category. It does not bother me at a level of gameplay, but it does for lack of consistency.

I understand to what extent Turn 10 Studios has wanted to make the experience more accessible, but that it happens by ventilating with a stroke the challenge is not holy of my devotion. Even less that there are still no penalties for passing curves, or that the points you receive for doing four races are much more than the challenge of entering a one-hour endurance test and winning.

Along the same lines, the decision to erase from the map the possibility of increasing the difficulty of the races to get more credits as a bonus. If before deactivating helps you to want to get closer to the simulation branch to get more credits with your victories, now everything becomes part of that vicious circle that turn out to be the modifiers you get in the loot boxes. That plus of the past is tied only to the difficulty of the Drivatar, artificial intelligence based on the cloud that collect how people play to create more vivid situations.

He did it in the past and does it again now, but it also includes his mistakes and an aggressiveness that, at times, remembers more a ‘Destruction Derby’ than a memorable race. Do not get me wrong, I love running, and the cars over come like real beasts, infinitely more than competing against vehicles that look like a Scalextric, but I can imagine the frustration that those who disable them can feel, especially when watching their cars lose control every two to three because of four kaffres.

With a scenario like this, it comes to mind that, perhaps, ‘Forza 7’ keeps behind your plate and paint a bad experience, but nothing further from reality. We already told the guys of Turn 10 Studios in their day, the intention of this new delivery is more focused on the sensations than the realism, and although they do not forget the latter, it is in what produces poneta to drive their cars where is the real hook.

With tests that force you to jump from one vehicle to another constantly, abandoning your initial scrap to jump to control a supercar means seeing the changes in a much clearer way. The grip, how they take turns, acceleration, braking … Change the car and it will look like you are facing a completely different game.

Better yet, do it dry and wet, on a closed night in which only your headlights light up, and moments before sunrise, in clean asphalt and in the sand stained by the desert desert of Dubai. All in the same race thanks to the dynamic meteorology that, in addition to being spectacular at a visual level, makes you perceive how what surrounds you is forcing you to change your driving style so as not to end up stamped against a fence.

Rarely in a car game have I seen so clear a change in my driving possibilities. In games with a more linear development, its possibilities are blurring as you advance, but here you are seeing everything behind the scenes once in a while, understanding that all that rain is not just to make it look good and look good in promotional materials , also to offer you a playable change. 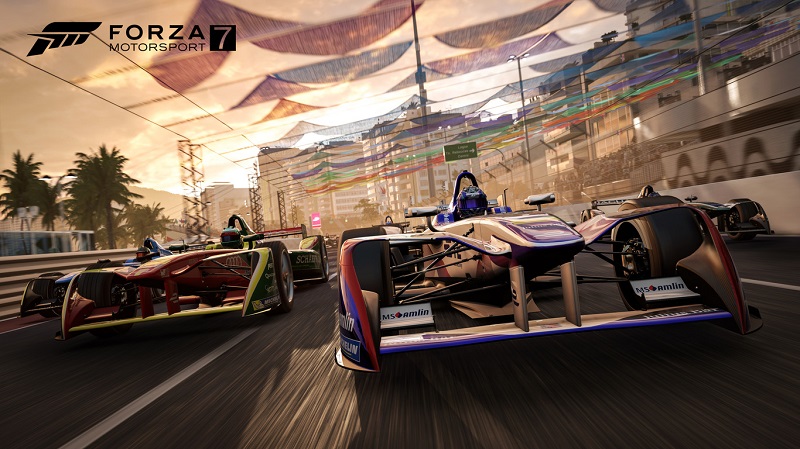 Forza 7 is the most beautiful game of the generation

I leave the best for the end, the point where tastes and personal perceptions have less room than in any other. ‘Forza Motorsport 7’ is the most spectacular game I have ever tried at the graphics level. The reflections in the puddles, the way the lights bathe the cars, those skies with birds fluttering that more than once almost get me to crash for not paying attention to the highway … It is something of another level, and not only in Xbox One X with 4K and HDR, also in my One of the first batch.

Only two aspects have managed to provoke some rejection in the technical. On the one hand loading times, longer than I would like, and I would swear longer than when I tried it on One X. Fortunately, while everything is rendering in the background, you have the option to play options, your collection of vehicles or invest the money won in boxes with prizes.

The other, a tiny detail, the water particles that jump as they pass over a puddle. I imagine that it is quite remarkable that we have to spin so fine to find it a great technical game play, even more when it holds 60 images per second as a champion, but that is to see that pastiche in images that could well be a background of desk, is like seeing a Christ with two pistols.

I do not forget the sound, another section in which ‘Forza 7’ takes the honor plate home and his colleagues make the wave when leaving class. Great in normal conditions, but spectacular when you plug a few helmets or 5.1 speakers, especially with nuances such as music and audience noises as they pass through the track that are deafened by the roar of the engines when they leave the site. A whole experience.